Operations are the basic unit of execution of an adapter. 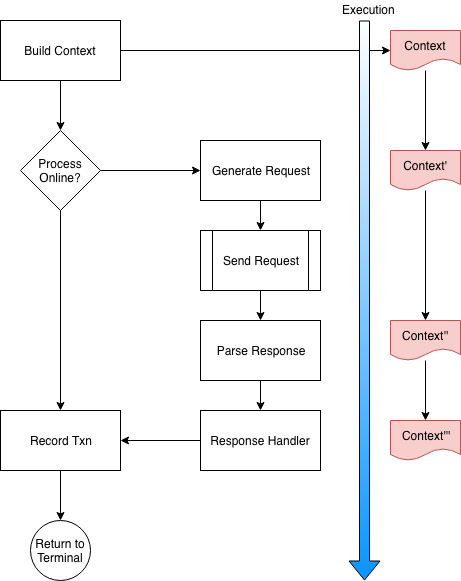 The above diagram shows the execution sequence of an operation. At the start of an operation, a context is built containing the global Javascrip variable bindings. Each operation will contain a set of predefined global variable names starting with $ prefix that the framework will provide i.e. $TRANSACTION. In addition, any constants defined by the developer will also be added to the context. Throughout the execution of an operation, your Javascript will have access to all these global variables. Your script will be able to read from as well as modify these variables as they execute.

Note though that the scope of a context is within a single transaction. Once a transaction executes to completion, the context will be discarded. Any new execution will begin with a new context.

A request message is sent to the acquiring host to request a financial transaction. The request is defined by the format and consists of many fields making up the request defined by the developer. Each field will contain either a constant or a Javascript expression to calculate its value during execution time.

A request is considered online only if it requires an explicit call out to the acquiring host. The pre-flight Online Script is responsible for determining whether the transaction should be online or not. Certain acquirers does not require all transactions to be online. For example, the refund operation does not require an online call in certain scenarios for some acquirer. If the transaction is offline, this script logic should return as its value a false to signal to the Letgo framework that an external call is not necessary and that the transaction should just be logged at Poynt.

If undefined, the default behavior is to always go online.

A response handler script is responsible for determining whether the operation execution was a success. It is always required and is executed right after the response message is parsed.

The following are standard operations that all adapters should define:

In addition to the above standard operations, all adapter must also define how transactions are settled for a merchant.

The Poynt Cloud Adapter Development frameworks allow you to define up to three different message-pair types as part of the settlement process: header, transactions, and trailer message. In ISO 8583 terminology:

These messages can be configured to be sent all together as one request or as individual requests on the network to the acquiring host. For each request, a handler script is required to be define like a standard operation to determine whether it was successful or not.

Messages are the basic unit of communications between the adapter and a remote host. Every adapter operation must have one request and one response.

Messages are defined by its formatting and the fields that make up the message.

Additional message format will be add in the future.

An optional checksum value can be automatically calculated by the framework and appended to your message if specified. The currently supported checksum algorithms are:

Messages are composed of a list of fields. Depending on the message format, the order in which the fields are defined in the IDE matters. For example, if the format is ISO 8583, the position of the field definitions will determine the order that the framework will serialize them. Putting them in the incorrect order will result in an error. However, JSON message format does not require any particular field ordering.

Message fields makes up a message. Request message fields are defined by the adapter developer with the appropriate value calculation mechanism. 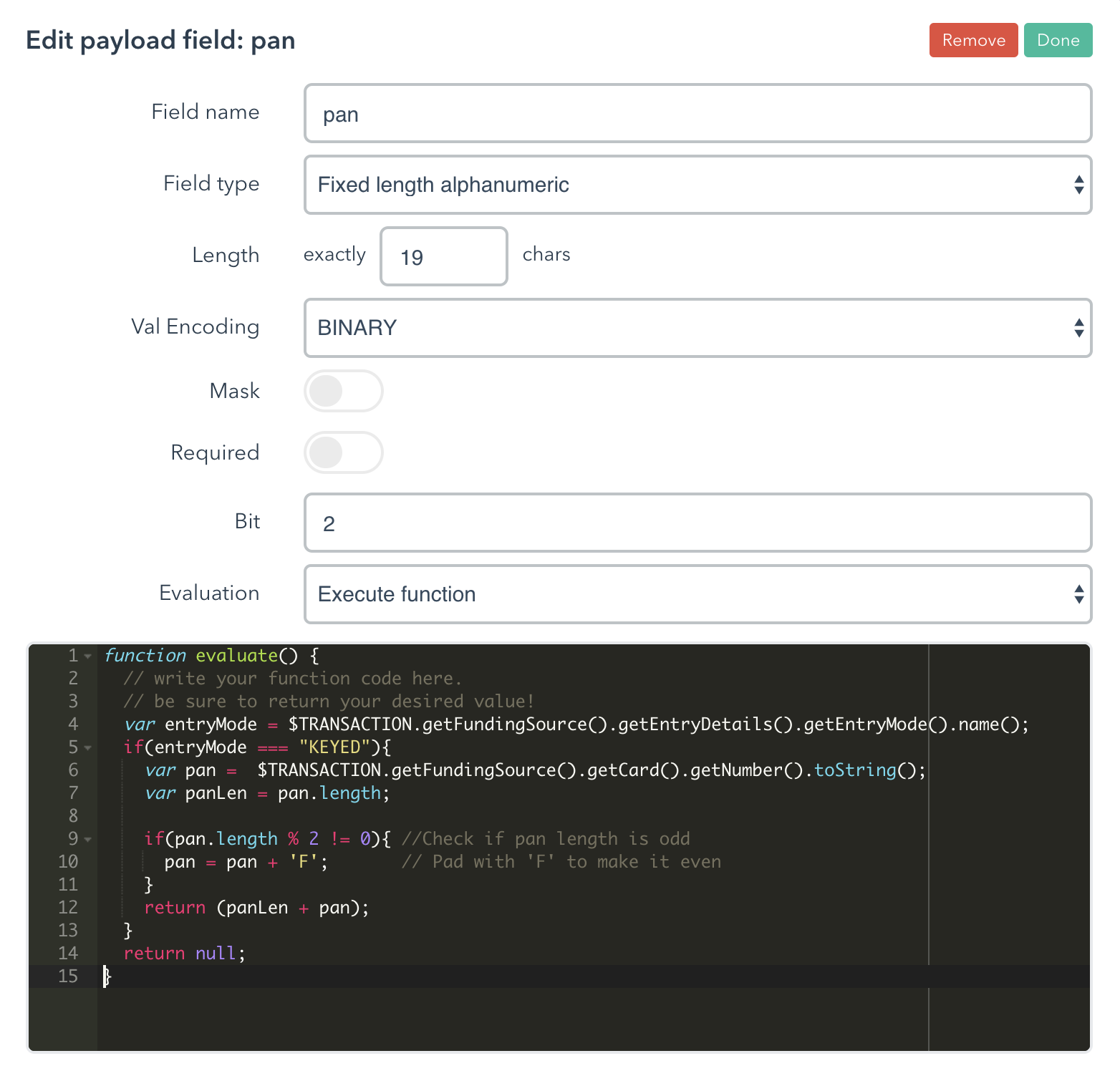 Depending on the message format and field types, certain field definitions are required or optional.

Every request message field MUST have a way to evaluate to a value. If the field is a constant type, then the value is simply a constant string. All other field types can be evaluated by two other methods:

If the value of the field can be simply expressed as a single Javascript expression, just specify it.

More complex fields that require calculation can be evaluated using a Javascript function. The function must return a value once it finishes the calculation

Ensure that all sensitive fields like PAN or track data have the Mask flag enabled. Masked fields will have it's payload ofuscated.

Fields marked as required cannot have an empty or null value. If this occurs, the framework will treat it as an error and will not process the message.

Each execution of an adapter operation is made against a context. A context is the set of global variables that are available to the Javascript code of an adapter during execution. All context variables from the framework begins with the special character $. 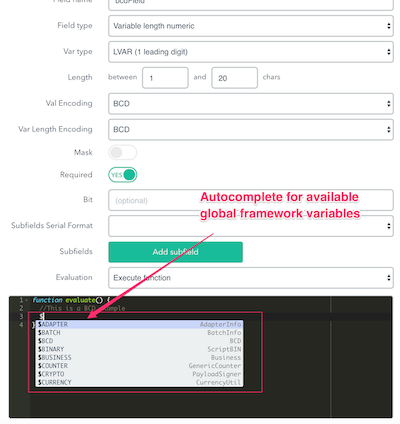 The framework will construct a new context for each execution containing an appropriate set of variables for each operations.

The following variables will always be available to all operations: 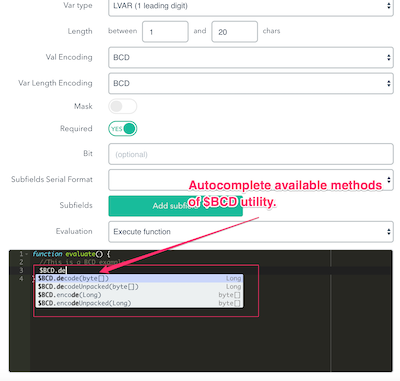 The following variables are available during the Authorization operations in addition to the common variables:

The following variables are available during the Capture operations in addition to the common variables:

The following variables are available during the Adjustment operations in addition to the common variables:

The following variables are available during the Void operations in addition to the common variables:

The following variables are available for all refunds:

The following variables are available for a non-reference refund:

The following variables are available for a referenced refund:

The following variables are available during the Balance Inquiry operation in addition to the common variables:

$TRANSACTION - contains the funding source (i.e. Card) object to inquire the balance of.

The following variables are available during the Exchange Rate operation in addition to the common variables:

The following variables are available to all scripts during settlement for each header, transaction, and trailer request message evaluation:

When processing individual transaction in the transaction loop, the following variables are available:

The framework provides a permanent storage facility for all adapters to store key-value pairs of integers called $COUNTER. Counter integer values are for the general purpose of counting various things like STAN, batch Numbers, etc... that the adapter must carries across transactions.

Each adapter, at runtime, will have access to its own $COUNTER instance that it can use to set, get, increment, or decrement values. The $COUNTER instance is bounded to the Business > Store > MID > TID. For example, if your business has two MID-TID pairs 1-1 and 1-2, calling $COUNTER.get('foo') during the processing of transaction for MID-TID 1-1 is a different value than those of MID-TID 1-2.

A payment transaction may come to Poynt Cloud in one of the following data objects :

You can find more details about Poynt APIs in this link : https://poynt.com/docs/api/

The processorOptions is a map of key-value strings. It is used for various processor specific not being available in the main model. It may include processor-specific data like installment info and taxes. processorOptions data object also includes the custom fields to be printed on the receipt.

This is the data object filled with the authorization response data from the acquirer. It is filled by the ResponseHandler.

Tree view of Transaction Data Object is as following : 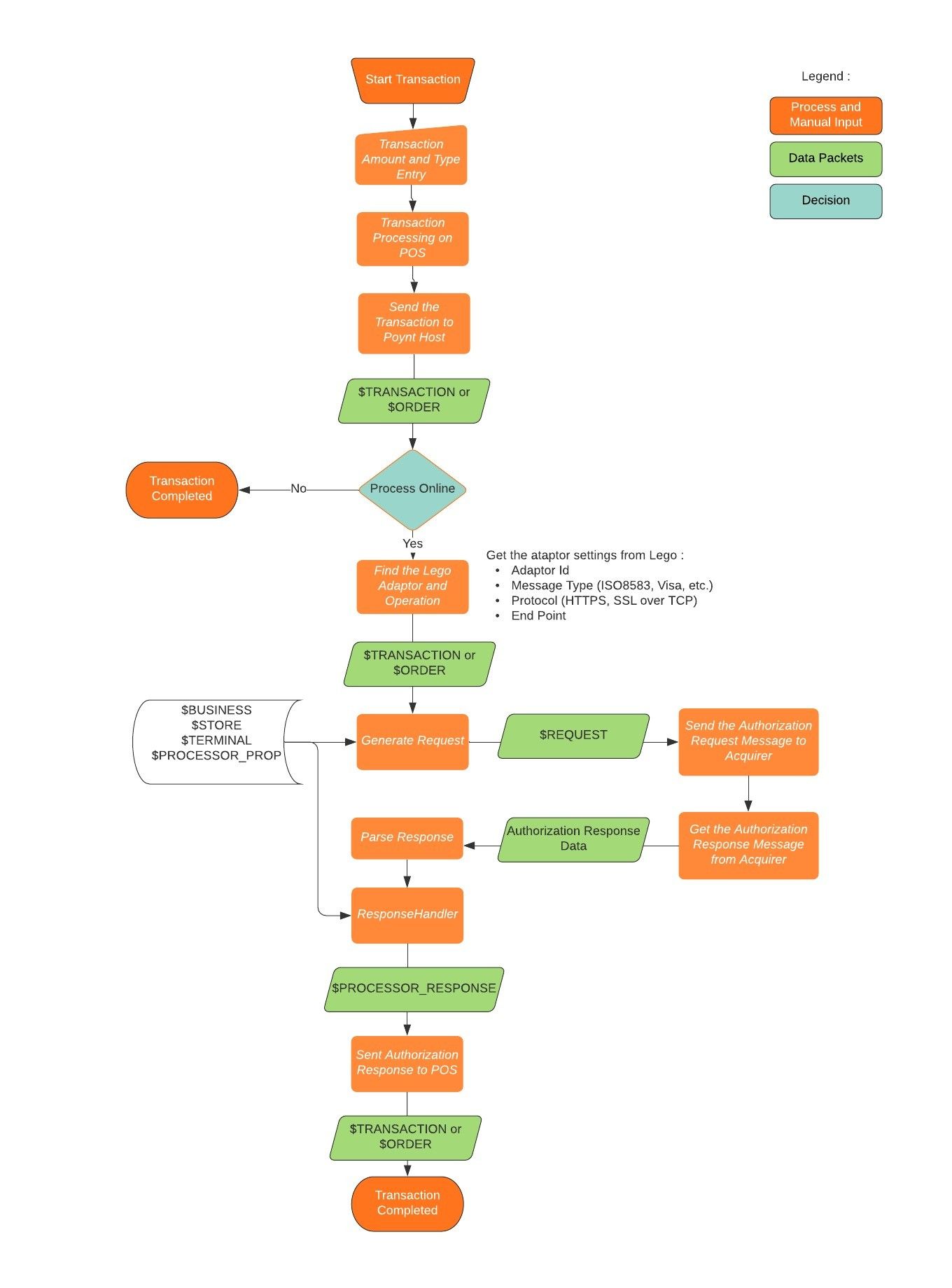 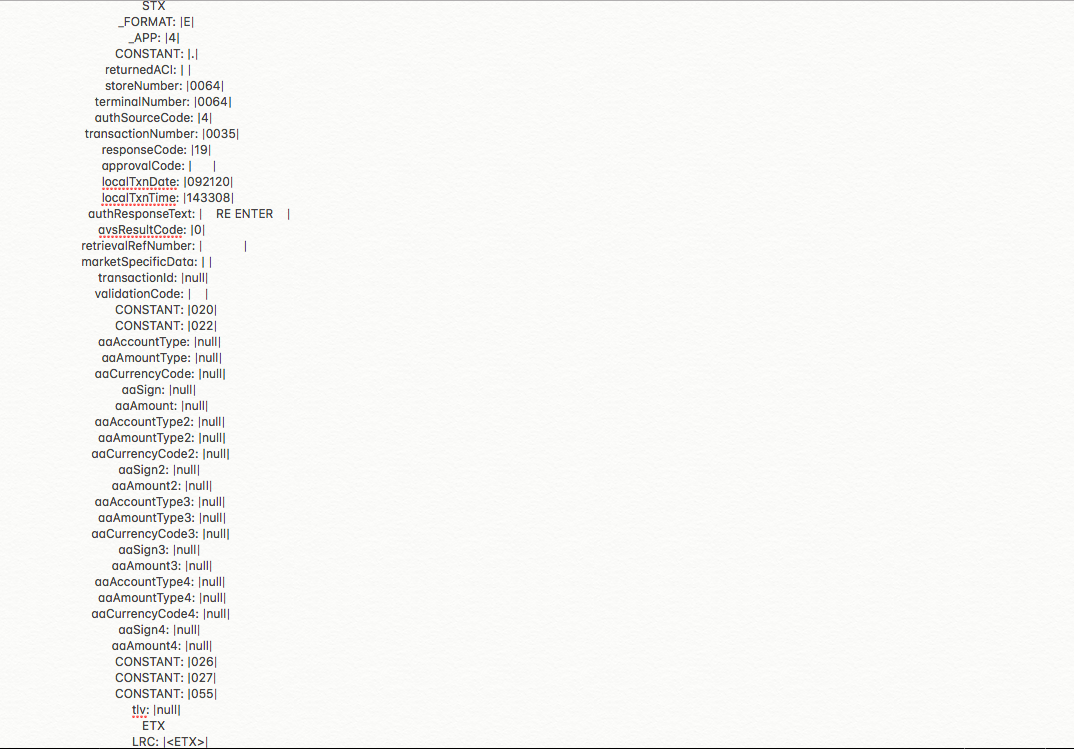 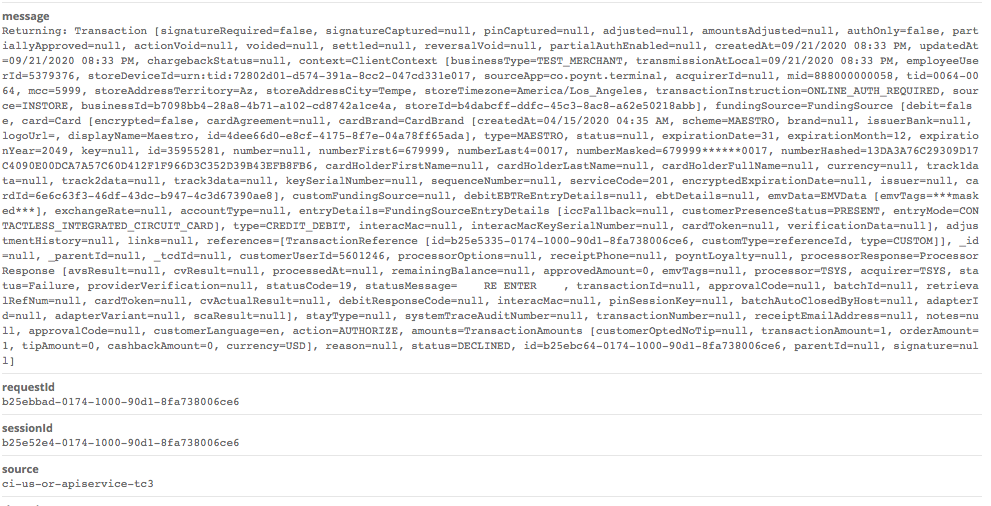 An Example of Transaction Data

This is the base object for the orders resource. Orders resource represents a purchase order for items or services. This object captures all items, amounts and transactions related to an order. One important point to note upfront is that all the order-level amount fields could be positive or negative. That is because unlike an item which is always either purchased or returned, an order could be a mixed bag of purchased or returned items. So the amounts could be positive or negative.

An Example of Order Data